The Hand of Hope; Story of Rey Escatron 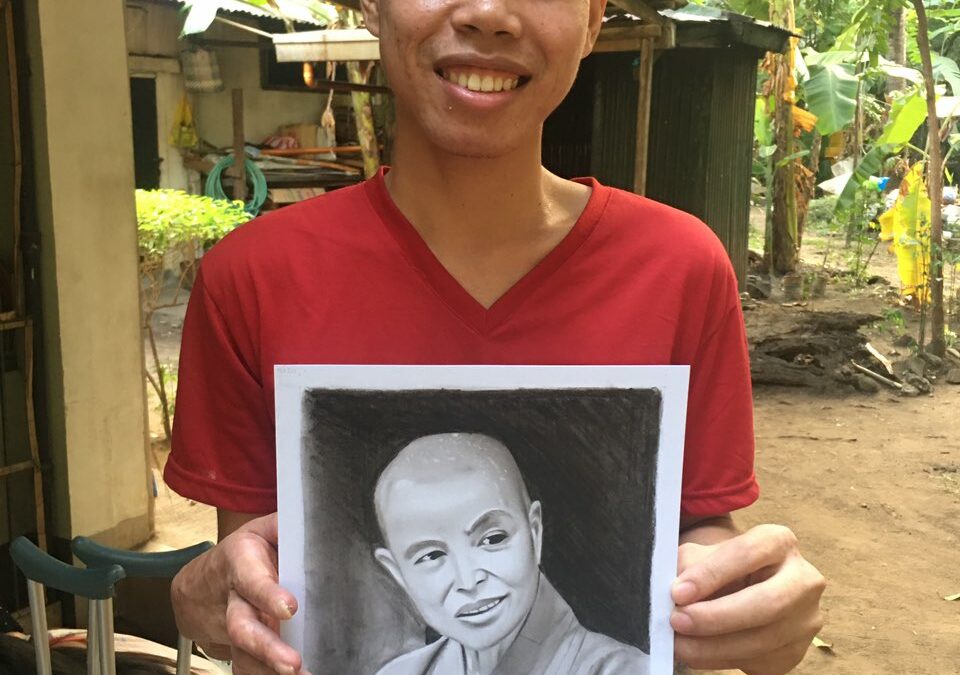 “A healthy mental attitude is vital to good health, which in turn leads to a happy and fulfilling life.” –Master Cheng Yen, Jing Si Aphorisms

Rey Escatron’s life is filled with inspiring lessons everyone should learn from. From fighting his own self’s low esteem down to the goals he has in life, surely, his story deserves to be heard.

Rey Escatron is a simple Tzu Chi Scholar with goals in his life. However, behind his smiles are battles he had been fighting for a long period of time. It all started at the age of 5 years old, where he accidentally fell to a copra charcoal dryer. 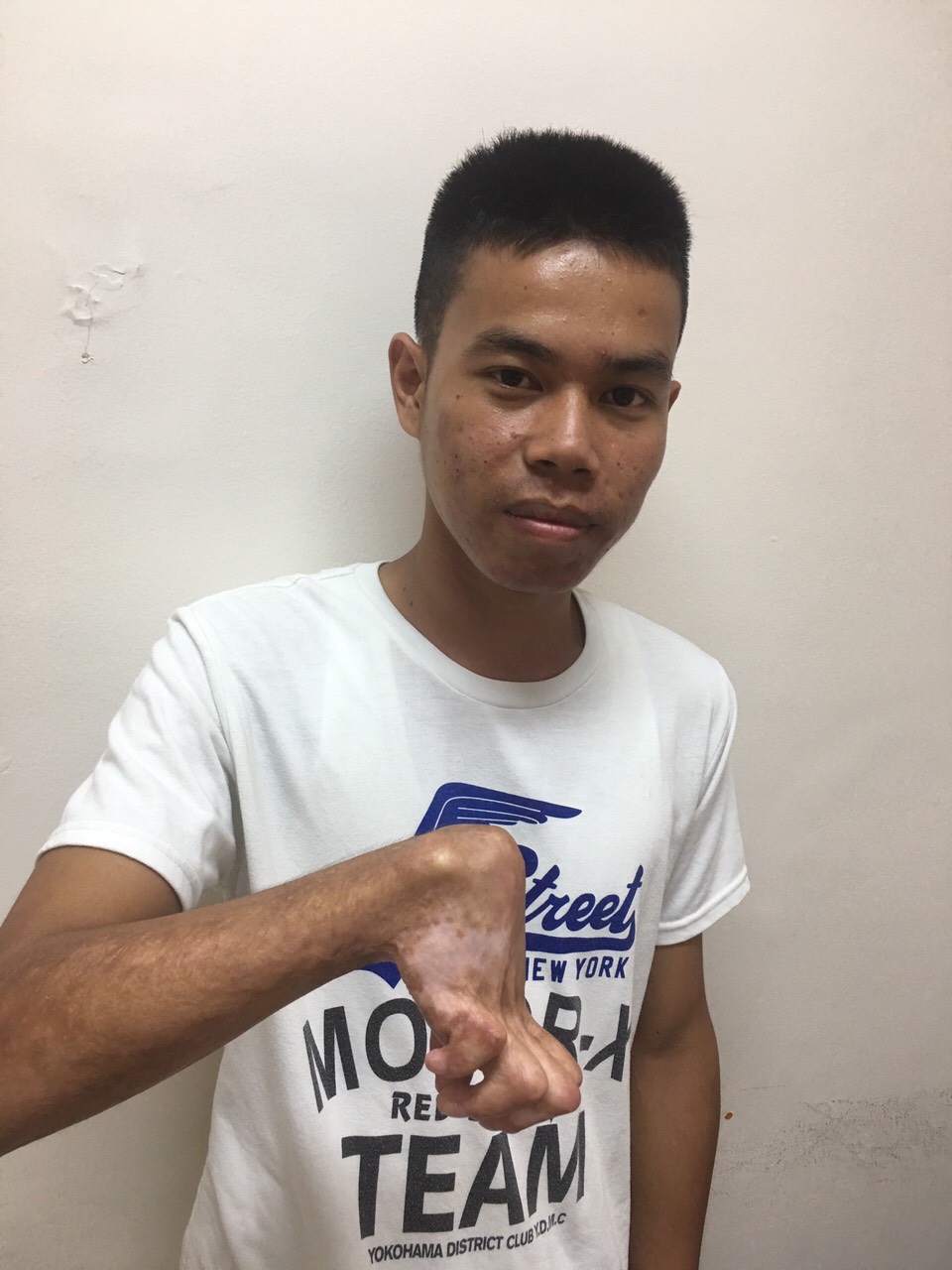 “I am Rey Escatron, 20 years old. I am one of the scholars from Tzu Chi Foundation who was also given help. When I was 5 years old, I accidentally fell from the copra charcoal dryer while playing fire with some weeds. The wood which gave balance to prevent me from falling was broken, that’s why I fell and my right hand was burned.” Rey narrated

Since his right hand was burned, it was deformed. According to him, Tzu Chi Foundation helped him not only in school matters, but also with his right hand operation.

“Somebody told me that Tzu Chi Foundation will give help. My older brother applied for this foundation to treat his eyes, and he brings me with him. I became a scholar and my deformed right hand was noticed, that’s why Sir Joven along with them, decided for me to undergo an operation at Manila. I went to Manila and I was operated. I have three operations to be taken ad my first operation was on August 2019. We went back here in Bohol by the month of February.” He said. 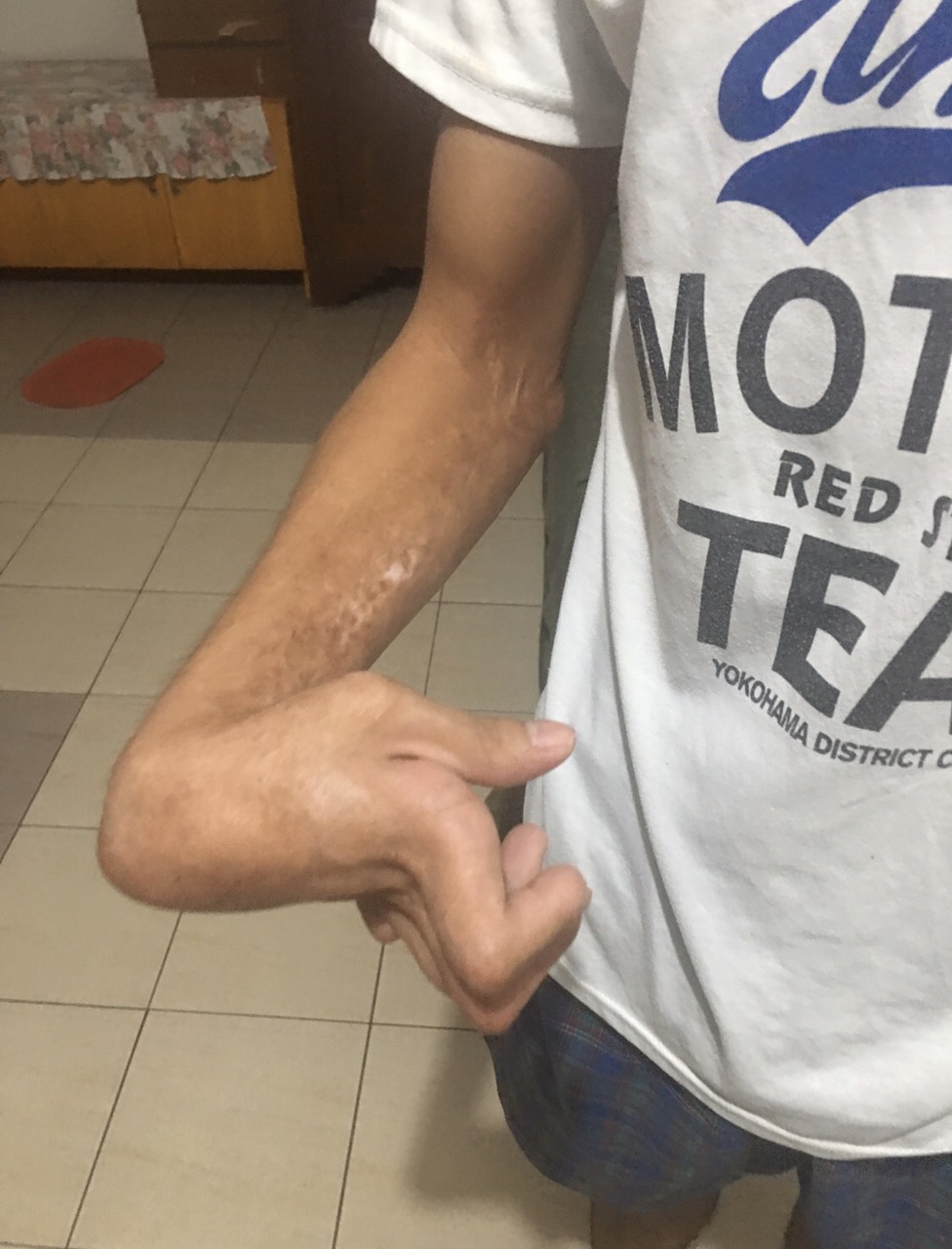 Rey also claimed that there’s a huge difference after operation. Before, when his hands were deformed and was yet to be operated, his self-confidence was too low, that he always covers his right hand with a handkerchief or towel to hide it from the public.

But after he was operated, his self-confidence boosts up, because his hand was no longer deformed.

“Before, I am not confident because I was ashamed because of my right hand. I always cover my hand with a handkerchief every time I go to school because I was afraid to be insulted by the people around me. Today, everything is so fine after the operation. My self-confidence came back and I am so happy.” Rey exclaimed with happiness.

“There’s a huge difference because my hand before was really deformed. But now, it is fixed. I am just under a therapy for my complete recovery.” He added. 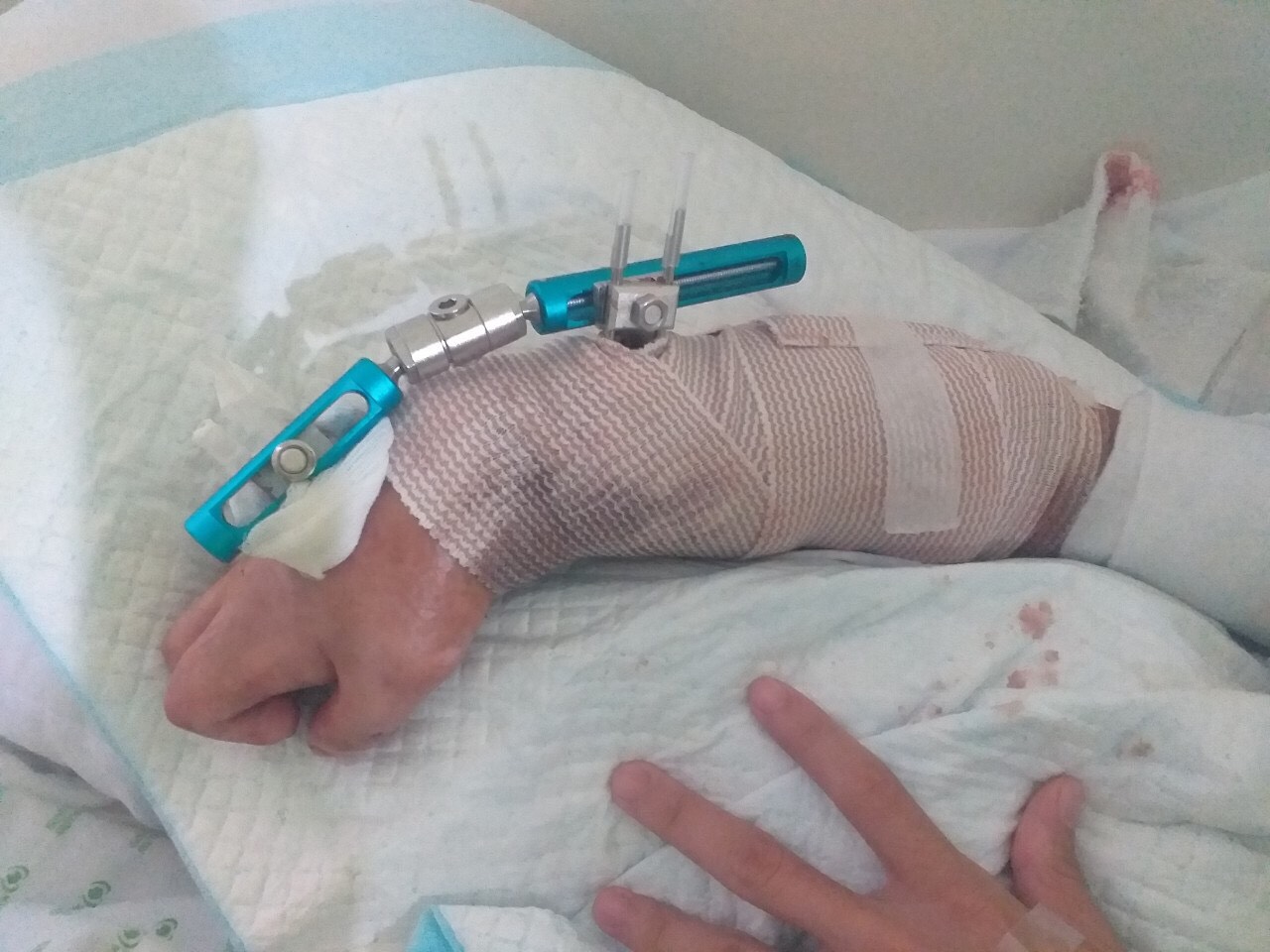 As a matter of fact, because of his extreme happiness, he was able to sketch the face of Master Cheng Yen.

“I have drawn the sketch of Master Cheng Yen as a gift for her. This is a sign of my thankfulness to her for helping me and other people.” He said.

Rey was very thankful for Tzu Chi Foundation’s compassion in helping. He was not just given aid in the field of education, but also, was given aid to fix his right hand. This inspires him to finish his studies and be a channel of love through giving, to the people around him.

“I’d like to thank Tzu Chi Foundation especially for making me as a scholar. I was not only given help in financial need, but they also helped me to develop myself so I can help others and to learn how to do good deeds. If I finish my studies, I’ll help my family and be a volunteer in every Tzu Chi activity.” He said sincerely.

Bibiana Escatron is a loving mother of Rey. In times of hardships, Bibiana was the one who served as Rey’s comfort and shelter. According to her, Rey has a dream and he wants to finish his studies to achieve all of those goals he has.

“Rey is my son. He is a very good and kind child. He really wants to finish his studies even if I told him that we’ll have to support his older brother’s studies before we can support his.” She said.

That’s why, because of Rey’s dedication to finish his studies, he decided to look for a scholarship, and that’s when he met Tzu Chi Foundation.

“He wants to finish his studies because he doesn’t want to stay in the house and do nothing. That’s why he met Tzu Chi Foundation.” She claimed

Bibiana was very happy and thankful because Rey’s hands were finally operated.

“I am very happy because Rey’s hands were finally operated. He is not ashamed of it anymore, or even covers his hands with handkerchief because it was no longer deformed. Rey is now confident and is proud of his hands. I was so thankful because Tzu Chi helped us without any doubt and with love.”

“I’d like to thank Tzu Chi foundation for helping us wholeheartedly, and also for helping those who need help in whatever aspect. They want to make sure that everything is catered, obligations are met and check-ups as well. I am so grateful to Tzu Chi Foundation.” She added. 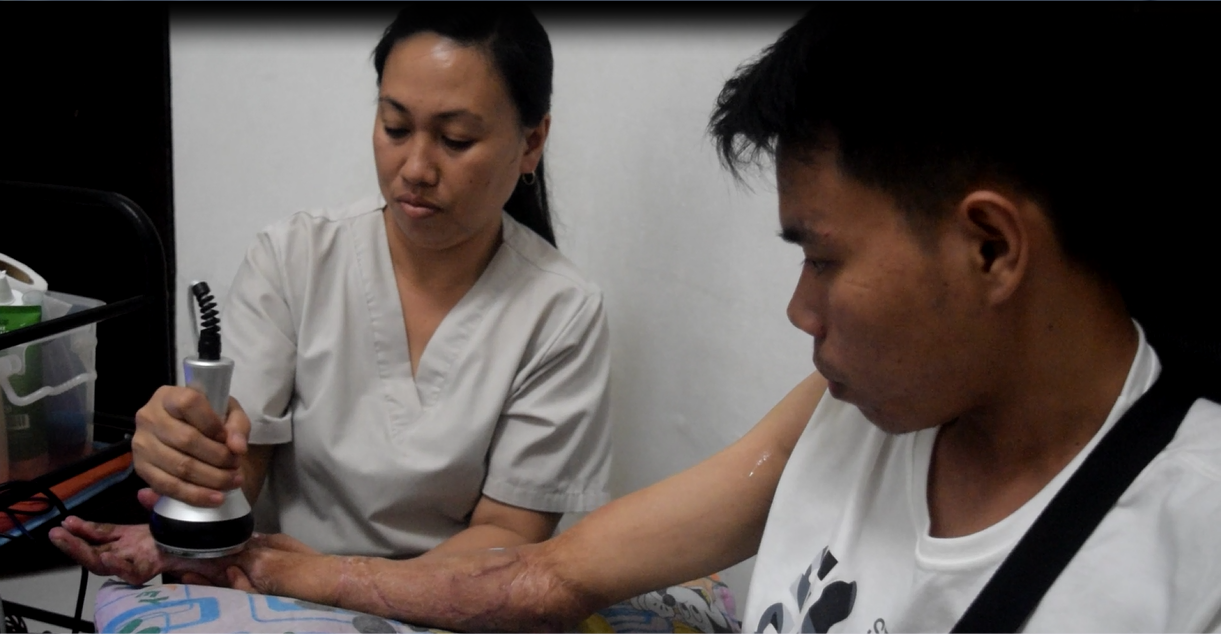 Rey Escatron is truly an inspiring man. Even beyond the challenges he had face, he remained dedicated to his goal—to finish his studies in order to help others as well. Indeed, what makes life fulfilling? It is to live with compassion to everyone.